The office is located on the main campus of UCR. The working hours of the office fluctuates, based on the appointment schedule.

The services of the office provides are:

Promoting Tohoku University Study-abroad Program and FGL Program to the local students:
･ Consult with UCR and local high-school students about Tohoku University's programs by appointment or email.
･ Promote the program through Japanese classes and the EAP office.

Recruiting high-school students.
･ Promote Tohoku University (especially the FGL program) to local high schools. In 2016 the Center reached out the Board of RUSD (Riverside Unified School District) and arranged the first official visit to Tohoku University with the goal of extending the FGL Program to the entire school district.

Tohoku students also participate in city events such as the Luna festival and have promoted the City of Sendai to citizens of Riverside. Riverside's Mayor R. Bailey has interacted with the Center (students and faculty from Tohoku University) and provided support. In addition, in 2016, Sendai's former Mayor Okuyama visited Tohoku University Center.
The Center also coordinates activities and events from other Japanese Universities in order to reach out to students, faculty and schools nationwide to assist in organizing recruitment events in the Los Angeles area.

The Tohoku Office is located in the room 202, 2nd Floor, F Building, Foreign Trade University, 91 Chua Lang Str., Dong Da Dist., Hanoi, Vietnam (Map). The working hours of the Office is from 8:00am - 5:00pm on every Monday to Friday. In case of emergency or special supports, students can also come directly to The Department of International Affairs, 9th Floor, A Building for more information.

The activities of the Office are now focused on: 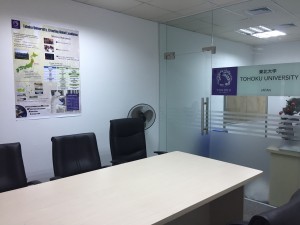 Recruiting high-school students
･ Contact with Leaders of Student Clubs in many high schools in Hanoi and related areas to promote about FGL Programs in the Highschool Student Group and Fanpage. For further information, they will contact TU Office by email or come directly to the Office.

At the moment we have not set up an official Facebook page for TU-FTU Cooperation Office. Instead, we created a Facebook Group for all Alumni Student from FTU studying in Tohoku University to create a network as well as assist FTU outgoing students to Tohoku University.

Tohoku University has overseas offices in around ten countries to promote international exchanges, education/research, university-industry collaborations, public relations, support for alumni associations and other international activities.
For other overseas offices, please refer to the website below.